A new planning application, ref. No. 20/02159/FULL1, has been made for the demolition of the existing garages and building of a new 4-bedroom dwelling house at 10 Highland Road, Bromley BR1 4AD.

An additional design statement has details of design and materials.

Update – 10 Highland Road, Bromley BR1 4AD – 9 June 2020
A planning application, ref. No. 19/03134/AMD, dated 29 April 2020 purports to be a non material amendment to planning ref. 19/03134/FULL1 to allow changes to the facades, roof and internal layouts during the demolition of garages to the rear of 10 Highland Road, Bromley BR1 4AD and the erection of a single two storey 3-bedroom house. The delegation report and decision are now available.

Objections were raised in relation to the approved scheme, and these included concerns with overlooking. The proposal includes amendments to the windows including an enlargement to the upper floor windows on the front elevation and installation of frameless glazed boxes to the side, which used to be a zinc-clad bay arrangement. It also now would introduce a large two-storey frameless window to the rear elevation. This would include an area of opaque glazing at first-floor level to help prevent overlooking, but visually, the introduction of this large glazed window and wider amendments would be a very noticeable change to the approved development and could give rise to greater perceptions of overlooking. Therefore, allowing this amendment would deprive neighbours of additional consultation.

The Council considers that the changes proposed will result in a material change to the development. If the applicants wish to pursue these amendments, they will need to submit a new planning application for the whole development.

for the demolition of existing garages to the rear of 10 Highland Road, Bromley BR1 4AD and the erection of a single two storey 3-bedroom house.

Nearby owners/occupiers were notified of the application and representations were received, which have been summarised as follows:

However, it is considered that this would be acceptable form of backland development. It would result in the provision of one new dwelling which contributes to the London Borough of Bromley’s overall level of housing provision. The revised design and not too dissimilar to the extant permission and it would not result in significant harm to the character or appearance of the locality and the impact on neighbouring residential amenities is on balance acceptable. 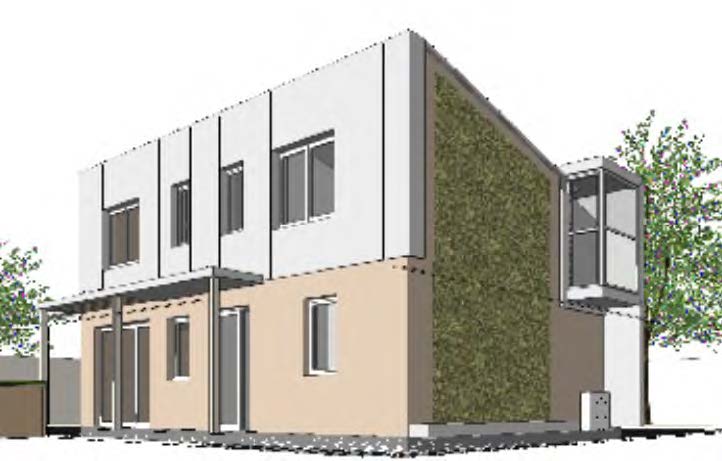 A new planning application, ref. No. 19/03134/FULL1, has been made for the demolition of existing garages to the rear of 10 Highland Road and the erection of a single two storey 3-bedroom house.

The design and access statement is available. The changes sought in this proposal are aimed at turning the house into a highly energy efficient house achieving an EPC A rating.

The applicants made a response on 9 November 2018 to the main points made in the letters of objection posted on the council’s website. In conclusion, they argue that the proposed house is modest in scale, and will have a minimal impact on neighbouring properties. It will make use of site which is currently disused and neglected, turning it into residential site dominated by greenery.

The decision is now available. 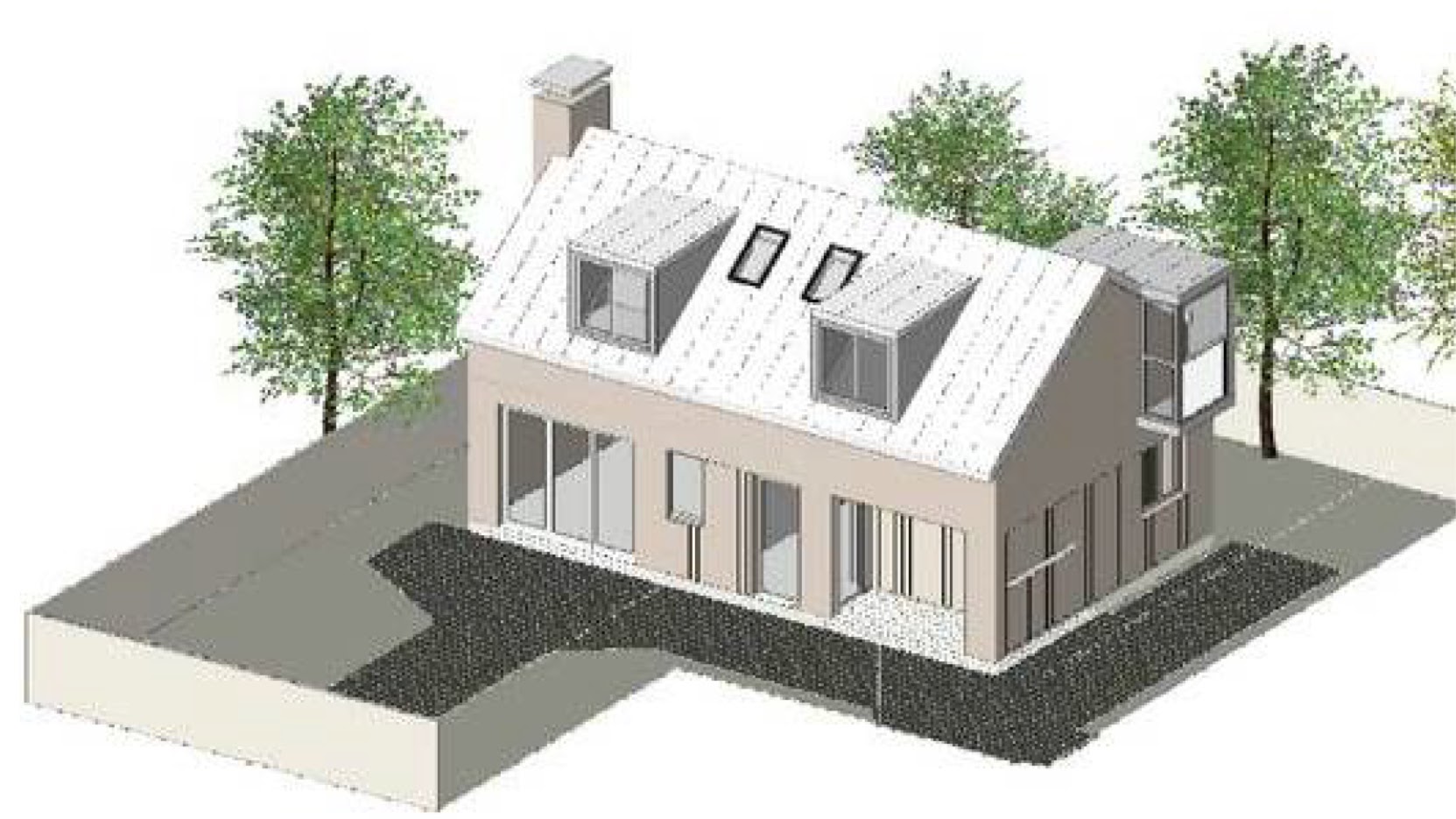 A new planning application, ref. No. 18/04241/FULL1, has been made for the demolition of existing garages to the rear of 10 Highland Road, Bromley BR1 4AD and the erection of a single 3 bedroom house.

See the design and access statement. In this, the developers say:

Introduction – context
The site is located at the rear of No 10 Highland Road and is currently occupied with 9 redundant garages built in precast concrete panels.

The site has an area of 299m2. The footprint area of the existing garages is 112m2. The proposal is to build a single dwelling with a footprint of 81.50m2.

This proposal follows on from a previous planning application for 5 houses on this site and the adjoining rear garden of No 8 Highland Road (PA No DC/17/04981 refused on 14/01/2018).

The site is accessed through a private lane located between No 8 and No 10 Highland Road.

Highland Road is a fairly quiet street boarded with houses of various sizes and styles including some large early 20th century houses generally converted into flats. This is the case of No 10 which includes a surgery on the ground floor and flats above.

To the north side of the site there are clusters of 1960's or 1970's brick terraced houses; two to three-storey high, some with garages, accessible from Grasmere Road.

The site is fairly rundown with evidence of fly tipping at the edges of the site. The reasons for this, perhaps is that the site is in a cul-de-sac not accessed frequently and hidden from view.

Proposal
This project is to build a detached; single storey house with loft accommodation. The existing garages will be removed and the proposed house will be built in a central position on the site with the main elevations facing south east and north west.

The house will include:

On the ground floor; an open plan dining/lounge and kitchen, shower room and hallway to be accessed from a covered porch.

The upper floor will house 3 loft style bedrooms under the roof.

The house will be built to high environmental standards, with a timber frame structure, cavity walls with outer facing brick and timber boarding on the side and front elevations.

The house will be built to meet the London Plan standards and will aim to meet part M of the building regulations and be adaptable for future use.

Scale of development, daylighting and privacy
Following concern expressed by occupants of neighbouring properties at Grasmere Road about potential daylighting obstruction and overshadowing of the previous scheme (ref. DC/17/04981), this proposal aims to address these concerns with this design which is for a small scale house, with eaves level at 3.5m. The house will be lower than the adjoining 1970's houses to the west.

The concern about privacy and overlooking will also be addressed by siting rear windows and doors only at ground floor level. Upper floor windows will be mainly facing south in the form of dormer windows. There will also be rooflights on the front and rear roof slopes. A dormer/bay window on the east elevation will have the side facing window obscured up to 1700 above floor level so as not to overlook the back garden of No 8 Highland Road.

These south facing windows will be away by at least 25m from the nearest windows at the rear of No 10 Highland Road flats.

The west flank wall of the proposed house will be facing the flank wall of No 14 Grasmere Road, which appears to have only an entrance door and a small window.

The house will be accessed from the lane through a gate and a paved area leading to a south facing entrance porch.

Update – 4 January 2018
The application, ref. No. 17/04981/FULL1, for a proposed development on the land of existing garages to the rear of 10 Highland Road and part of the rear garden of 8 Highland Road, including demolition of garages and erection of five terrace houses, with associated parking and refuse store at 8 Highland Road, Bromley BR1 4AD, has been refused for the following reasons:

See the delegation report and decision.

In response to the main points made in the letters of objection, YB Architects had said:

Privacy / overlooking
The proposed houses openings mainly south facing or face into the courtyards at the front.  To the rear there are only windows and doors on the ground floor, and no windows on the upper floor north facing elevation, thus avoiding any overlooking of properties on Grasmere Road.

Traffic / Parking
The site, although currently disused, has 9 garages, which implies at least 9 cars. The proposal allows for only 6 car parking spaces and provides space for cycle parking. Refer to submitted transport report.

The access road and parking spaces will be paved with granite setts defining a semi-private space and encouraging low speed.  Other traffic calming measures such as road humps could be added.

The disabled parking space will be enlarged to 3.6m.

Backland Development (policies BE1 and H7)
Only around 30% of the land at the rear of No 8 Highland Road is proposed to be built on; the remaining will be kept as a landscaped area and communal garden for the residents.

The proposed development is small scale and low density backland is currently unused and non-maintained.

Trees
The proposed tree removals are only for old drying trees, or trees with limited life. The submitted tree survey recommends impact mitigating measures to protect the existing trees during and after construction.

Water run-off
All hard landscaping including access road and parking spaces will be paved with permeable paving allowing water to be absorbed by the ground.

Risk of subsidence to neighbouring houses
This is a technical matter and will be addressed at design detailing stage. The initial structural engineers’ recommendations are to use piled foundations which would protect the tree roots as well as stabilize the ground.

Fire risk, fire engine access
In order to mitigate this aspect it is proposed to fit the houses with sprinklers.

Refuse storage
Currently flats to No 10 place their bins (exposed separate small bins) along the lane.  The proposal suggests grouping the refuse from these flats and the proposed development into a new closed and covered bin store.  This bin store will be located on the new land (currently behind the fence) acquired from the side of No 10 Highland Road.  This site will be within 18m from Highland Road which is the recommended maximum distance for bin location from the road.

Letter to neighbours
A letter describing the proposed project has been sent to neighbours, including the flats at No 10 Highland Road.  This was done before the submission of the planning application. 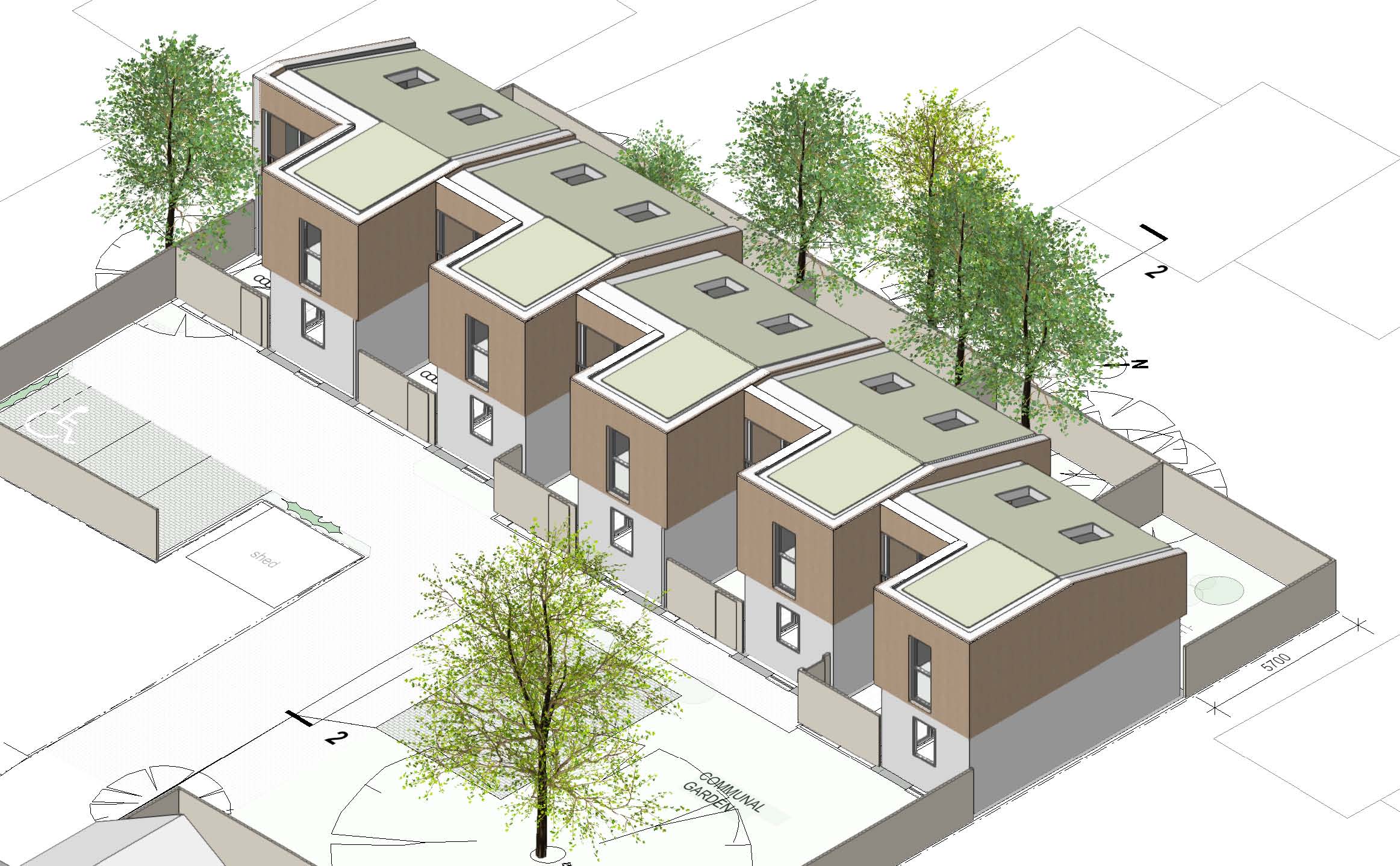 An application, ref. No. 17/04981/FULL1, has been made for a proposed development on the land of existing garages to the rear of 10 Highland Road and part of the rear garden of 8 Highland Road, including demolition of garages and erection of five terrace houses, with associated parking and refuse store at 8 Highland Road, Bromley BR1 4AD.

The Design and Access Statement shows that the proposal is as follows:

Conclusions are stated as follows: