The submission has been refused (details here) - the third application to be unsuccessful.  An appeal is possible, but at the moment there are no applications outstanding.

The Decision Notice can be found here.

The full report can be found here.

The appeal has been dismissed, and costs refused - full details.

2 Warren Avenue (the one below, known as the artist's fantasy) 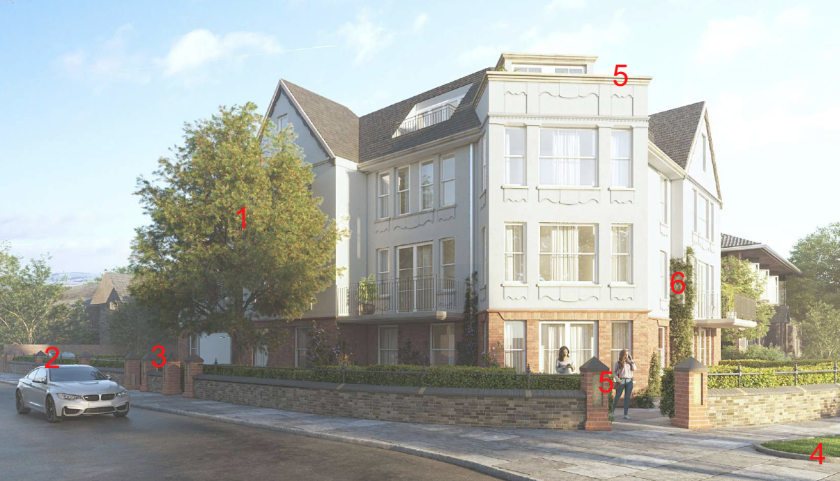 See Planning Inspectorate for details of Appeal. Object by 14 Sept. We would recommend doing so for those who live near the property, but otherwise not necessary as Inspector should read all previous objections. Neighbours can request a visit from the Inspector.

A third application has been submitted, which on this occasion retains the much-loved current building. We have commented here

We published the final version of our objection here

Not unexpectedly a new application has been submitted for 2 Warren Avenue. It is again too big, although cosmetic changes have been made. Full details can be found here. The best document to start with is the Design and Access Statement which gives a good overview.

Our objection (draft) can be found here.

Below is the 'Artist's Fantasy' about which we have some comments.

4 = In reality, no grass outside the property 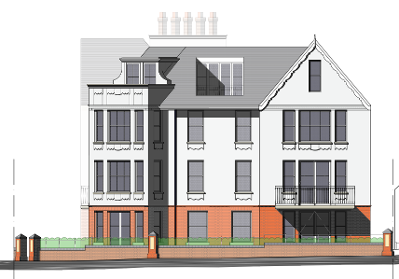 Documents detailing refusing here and here. The planning application, ref. No. 21/01982/FULL1,  for the demolition of the existing building and construction of a part three/four storey block of 9 residential flats with associated parking, amenity space and cycle storage at 2 Warren Avenue, Bromley BR1 4BS has been refused for the following reasons:

(Please note: this page is being continually updated at the present time)

If you value the work we do and want to support us, especially in opposing this development, please join us here. If you would like to recieve emails about this proposal, please email us here. You can follow us on twitter here.

If you have already objected - many thanks. If you haven't yet, please do so - the more objections the better. In nearly 15 years we have never seen such an unpopular application in our area with nearly 100 objections within just a few days. Our website is seeing record traffic:-

17.6.21 Our objection to the application can be found here

Interestingly, the Title Register refers to a Covenant that only detached housesand semi's can be built on the site. However, it is probable that this is not enforceable, but if there are any lawyers out there....

We have just been advised of a proposal (planning application 21/01982) to demolish the landmark building at 2 Warren Avenue, Bromley and replace it with a wholly inappropriate, incongruous and out-of-character 4 storey block of 9 flats for 41 (!) people. Were this egregious  proposal to be permitted, it would set an appalling precedent which would likely result in many more flatted developments taking place in Bromley Avenue, Warren Avenue and Farnaby Road.

We will be objecting to this proposal and our initial thoughts are below. Documents are available on Bromley's website. The 'Design and Access Statement' is now available.

Objections can be made on line here. Objections must be made by 24 June at the latest.

When you object you may wish to put the following observations into your own words.

Appalling - totally inappropriate and out-of-character for the area: -

In addition, demolition would result in the loss of this prominent and historically important Victorian landmark house which is part of the original Bromley Park Estate.  Bromley Park Estate has qualities that deserve recognition and protection. The land was acquired by Lord Farnborough living at Bromley Hill (now Bromley Court Hotel) and upon his death acquired and developed by Samuel Cawston from the 1870s as a Garden Suburb with some of the finest houses in the area, its own church and artisan cottages at Park End. The area, including this property, was recommended for Conservation in 2004.

A block of flats designed to look like a single house, or a pair of semis, would be much more appropriate than the proposed bland and insensitive design.  A good example would be 61 The Avenue (visible from Downs Hill) which is currently being built. Here, several flats have been disguised as two large houses. 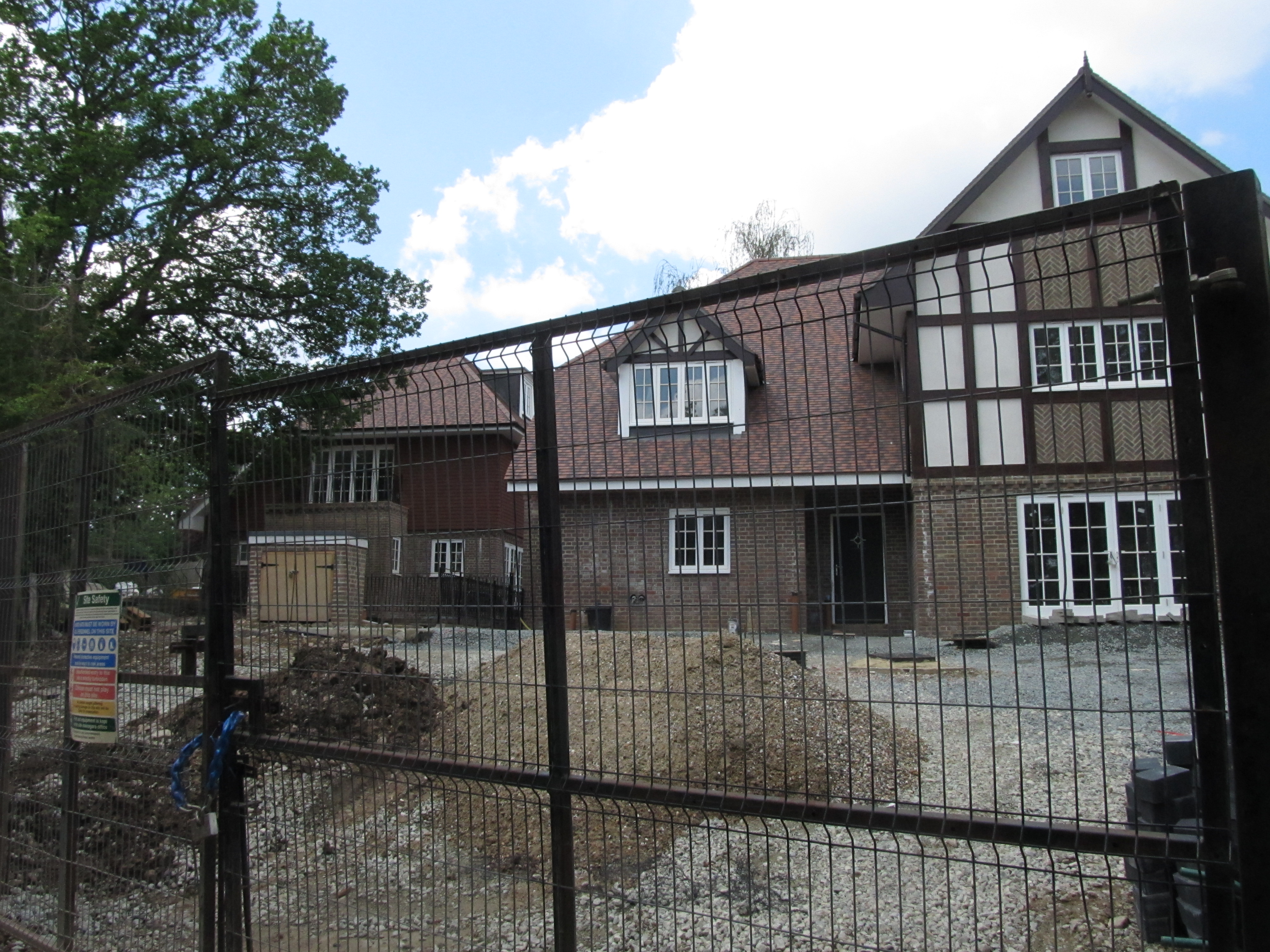 The site is particularly visible and sensitive and so an outstanding design is necessary. The proposal is not it. The picture below shows the prominence of the site:-

The footprint of the proposal would be vastly increased with most of the site given over to hard surfaces. There would be minimal garden, if it could be called that. The faint red line in the diagram below is the existing footprint.

The building itself would significantly overstep the existing building line to the south and west (Bromley Avenue and Warren Avenue respectively) and at its worst, the balconies would almost be in touching distance of the pavement. The development would be a massive intrusion in the street scene for this reason alone. See below: top left dashed grey square is a balcony very close to the pavement. 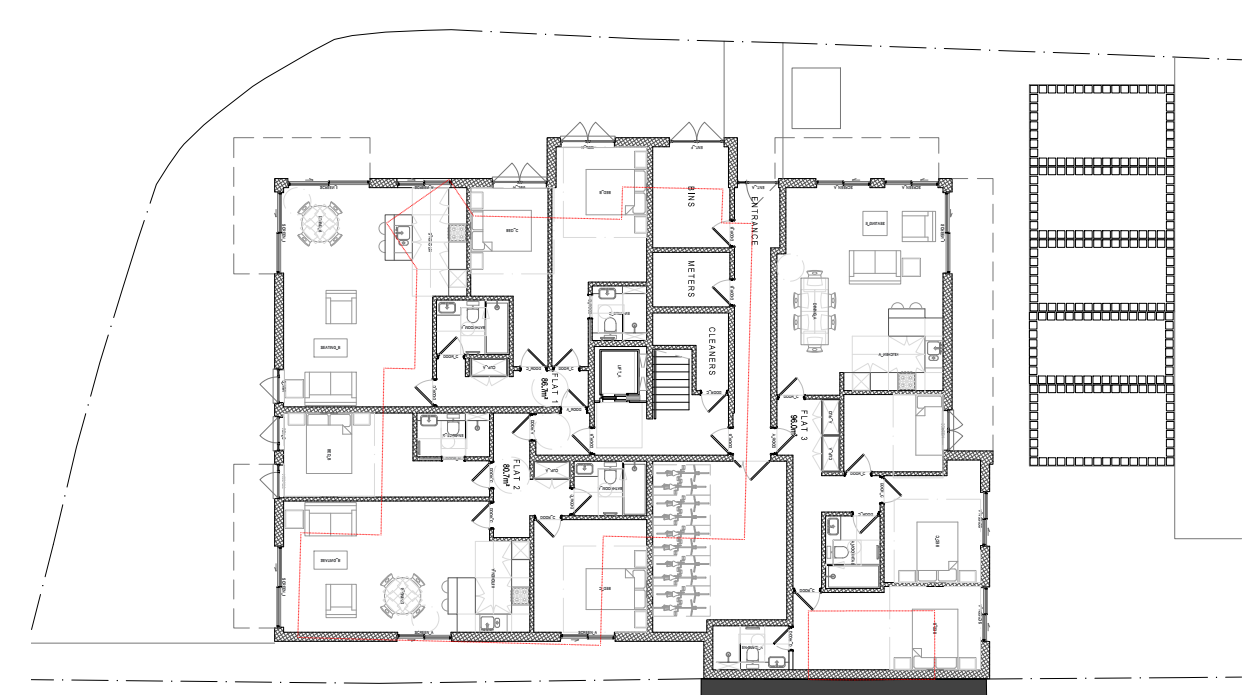 The front of the building would be much closer to Bromley Avenue than other houses in this road and the same is true for Warren Avenue. With 4 storeys so close to the pavement, there would be a profound sense of overbearing and dominance.

With many frequently used rooms looking down, across and into the garden of 38 Warren Avenue, there  would be a significant loss in privacy and sense of over-looking.

Policy 8 of Bromley's  Local Plan requires there to be at least 1m side space between the proposal and the boundary and possibly more in all the circumstances.  With an eastern flank rising to 3 storeys we believe a greater separation than that proposed is necessary between the proposal and 38 Bromley Avenue to avoid the creation of a cramped appearance.

The concern here is that there is simply no space for any meaningful landscaping to break up the massive impact this huge building would have on the street scene. At the current time, no formal landscaping scheme documentation has been provided which might in itself say something. Two of the trees that are shown (below) actually overlap balconies so clearly this does not work, as it would be unacceptable to proposed occupiers. Thus there would be even less screening.

A particular concern is that the rear garden would be turned into a large carpark, wholly out of character with Warren Avenue. There would be no space to hide the carpark behind substantial trees and bushes.  See below:- 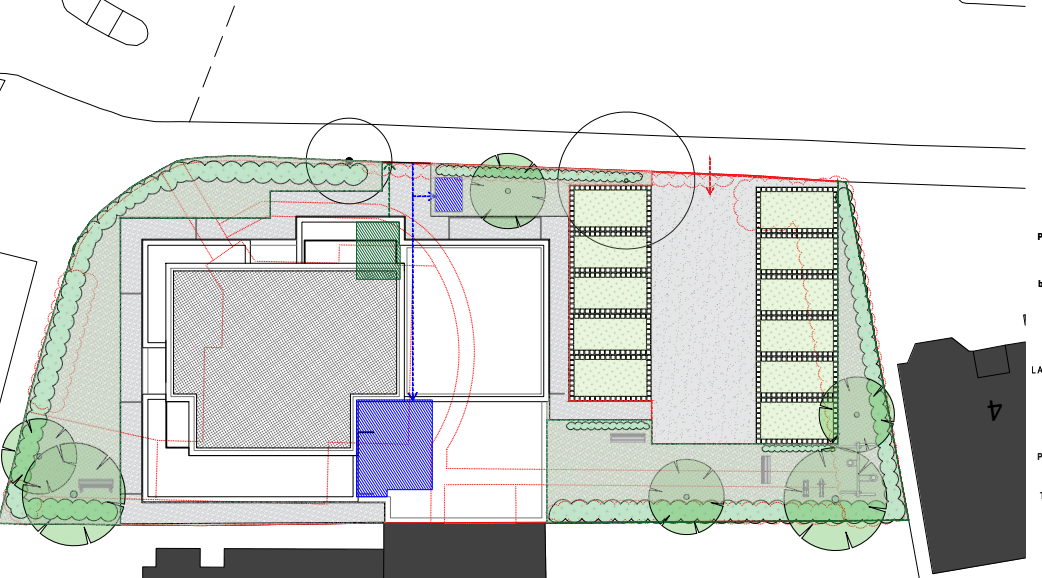 In the picture below, taken from the Transport Assessment, we are concerned that:-

A similar situation at 113 Foxgrove Road failed to provide adequate screening for the carpark  - the shrubs should have extended as shown by the arrows but now the carpark is all too visible. 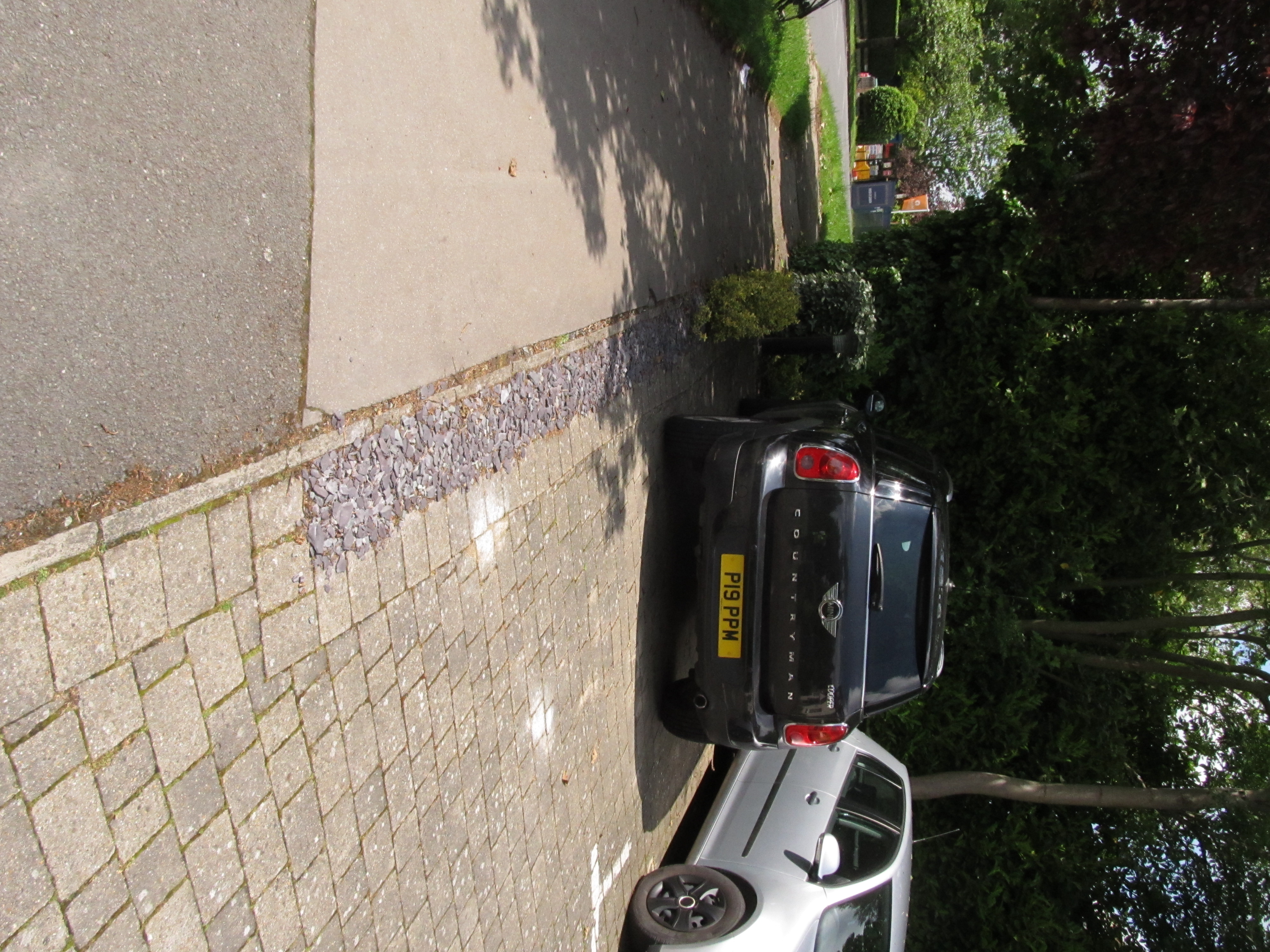 The height of the proposal would be nominally the same as the existing turret. However, this height would be extended for most of the width and depth of the building, rather than just the turret. Further, we are concerned (and are checking this) that there may be a lift over-run which is not shown in the plans. If it were to exist, this would add an intrusive shed-like block above the proposed roof to accommodate lift machinery. The height, and the fact that the building would provide 4 storeys of accommodation, is wholly uncharacteristic in the surrounding area and would lead to a profound sense of dominance and overbearing for this very sensitive and highly visible location.

This diagram shows external storage space for cycles (blue square). No details about this are provided and the concern is that a covered bike shed right next to Warren Avenue pavement would be unsightly, incongruous and out-of-character to the area.