Training sessions for volunteers will take place at the Lewisham Arts Café in Manor Park at 10 a.m. until noon on 27 September 2017. Anybody who wants to volunteer should e-mail ravensbournermi@gmail.com.

According to the News Shopper, sewage has poured into Glassmill Pond in Bromley because a pipe was not connected to the network properly. However, Thames Water say this did not result in any contamination of the water supply in the area. They were on site since Sunday morning hard to clear it up. 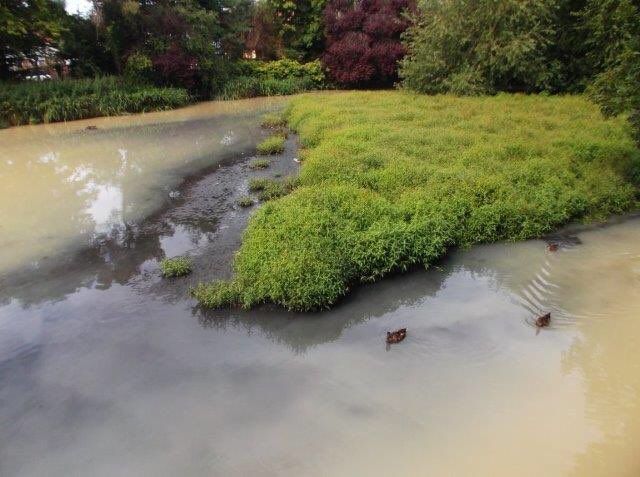 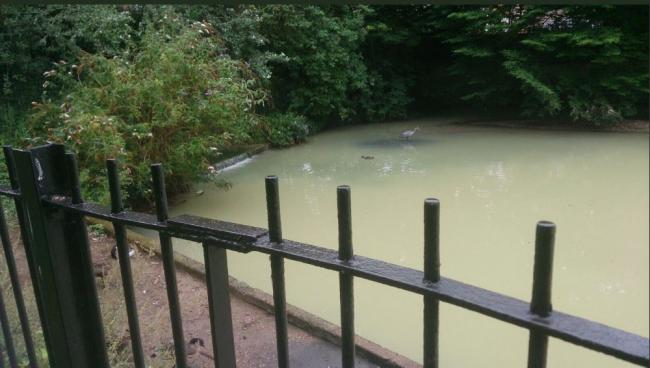 Pictures of the pond have been posted on Twitter by the Quaggy Waterways Action Group. The pictures showed birds swimming in the pollution. However, the Environment Agency said that no damage was done to the pond’s wildlife. They are looking in to how the incident occurred and asking members of the public who have more information to contact 0800 807 060. 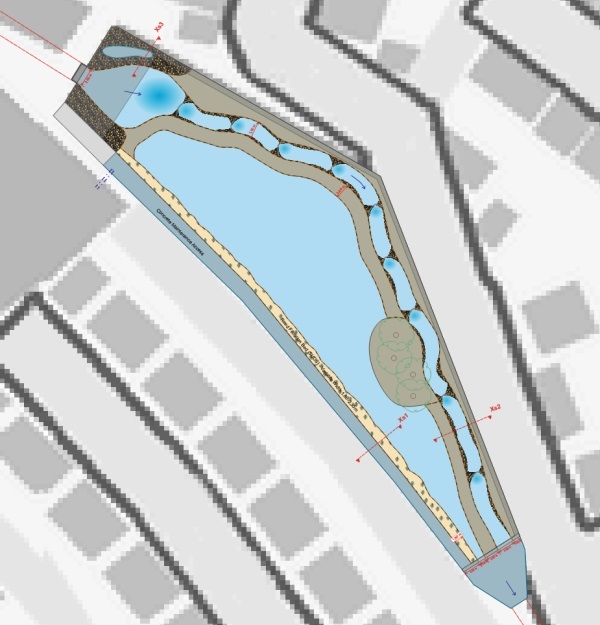 A view of what is proposed for Glassmill Pond is available in the following document:

The original idea from Thames 21 was:

[The latest idea for the pond is for an] optional causeway that runs parallel to the footpath and planted with reeds. This is to filter and clean the drain water coming into the pond. Let me know what you think about this, it can be made shorter or eliminated entirely. The drawing attached shows the current weir still in place and the river flowing through it, I am proposing that this weir is removed entirely and a short wall built between the island and eastern wall. I think this will give a better vista when looking from the bridge with the river flowing around vegetated gravel banks.

The following are comments about this received from a couple of interested people. They will be used by Thames 21 to determine the final design:

First comment
I am rather concerned at the very neat strip of reeds proposed as am concerned that they will spread again and create a maintenance problem. If the reason for their installation in to filter out any pollution coming into the pond would it not be better to just have them around the two inlets (i.e.main and side)? I also feel that the island should be a bit bigger which would use up some of the existing silt by this and also raise the island level so that not inundated after a downpour upstream.

Second comment
In the engineers' drawing it looks like the whole weir is still there, in which case there would still be a millpond.

I am very concerned that the removal of the whole weir would actually result in the removal of the millpond, which is only there due to the presence of the weir which holds in the water, which always flows downwards where it can, due to gravity.

Wouldn't this just create an enormous ugly concrete channel with the river flowing through it?

A wall from the island to the edge would not hold any water in and wouldn't it just look like an incongruously pointless wall, as well as permitting the local cats to access the birds’ nests on the island.

I am worried that the removal of part of the weir with a wall built at the side to hold the water in the pond as proposed at the meeting in the church hall might not work very well either.

I fear that the pond created in this way would be, at best, a rather stagnant, sewage, oil and weed killer filled pond, as the road run off from the whole area goes into the millpond and it is also regularly polluted with sewage, due to some fault, in the local sewer system, and the river water would no longer flow through the pond to aerate it and wash out the pollutants.

In addition, the volume of water flowing through the pond area is extremely variable depending on rainfall and the time of year, due to deciduous trees transpiring large amounts of water in summer and none in the winter. I think this factor may also cause problems with this project.

I strongly recommend that nothing is done without consulting engineers again as we may inadvertently create something worse.

Maybe we need to clarify the aims of this project. Currently we have a millpond of historic interest which is also a wildlife area with nesting birds and a colony of a special kind of little bats.

Update - 29 October 2014
We would like to highlight that a new project to restore Glassmill Pond is likely to commence soon. Please think about being involved. The following document gives details:
The officer overseeing the project at Bromley Council is Lorraine Courtney, who can be contacted for more information.
Update - 16 August 2014
We have received the following update regarding the work at Glassmill pond:

I apologise for not writing to you sooner, June and July are extremely busy months for me, especially when I take some holiday leave too. However, I would like to say thank you for those who attended the Glassmill Presentation in June and many thanks to Tony Banfield for the historical presentation, which was really interesting.

Designs,
There was a unanimous show of hands for our proposal to create a new river channel around the far end of the pond, whilst retaining a sizable pond in the fore, in relation to the footpath that links the parks. My next task is to appoint the engineers to make this happen and I will be meeting with them next week to discuss the details. We should have some drawings ready for September, which will need to be thoroughly looked over by the Environment Agency and amended if necessary

Silt,
I feel the silt problem is getting worse in the pond since the floods earlier this year. I think there has been quite a bit of washout from further upstream and it’s bringing in a lot more sand and gravel into the pond. There is far too much silt in the pond and I will need to get the silt tested for potential contaminates. This will tell us what we can do with it within the pond and once we start to remove it. I’ will start this aspect of the project soon.

Pollution,
As some of are aware, there have continuous pollution incidents in the pond historically and of late. Many thanks to Kari and Barry for reporting the pollution incidents last week, where detergent is being washed in from a drain that empties into the pond. This caused a significant number of fish to die or be in distress. The Environment Agency and Thames Water investigated, but could not find the source of the pollution or anything too noxious that was potentially killing the fish. The detergent could cause an oxygen depletion in the water, which will cause fish kills, fortunately this dilutes out and its effects are much reduced. We do know from Thames Water that there are a few sewage misconnections from nearby properties that could be causing the problems. There are enforcement notices issued by the council to the property owners to remedy the situation. I will look into this in the coming weeks and see where we are up to in trying to resolve this. We need to keep reporting these incidents, as this directly equates to action from the authorities.

Volunteering Days,
I will set up the next round of volunteering days from September to do some general maintenance around the pond now that the birds have stopped nesting. I will go down next Thursday and do a litter pick in the pond should anyone want to join us. Waders will be supplied!

I will keep you all updated as and when I have new information, but please keep me informed about anything that has an impact on the pond, whether directly or indirectly.

Update - 12 June 2014
On Tuesday 24 June 2014, 6:30-9:30 p.m., Thames21 will present the proposals which will have an impact on the future of the Glassmill Pond at Bromley Town Church, 2 Ethelbert Road, Bromley BR1 1JA. The various proposals are the results of the public consultations which Thames21 held earlier in the year. See this link for details. 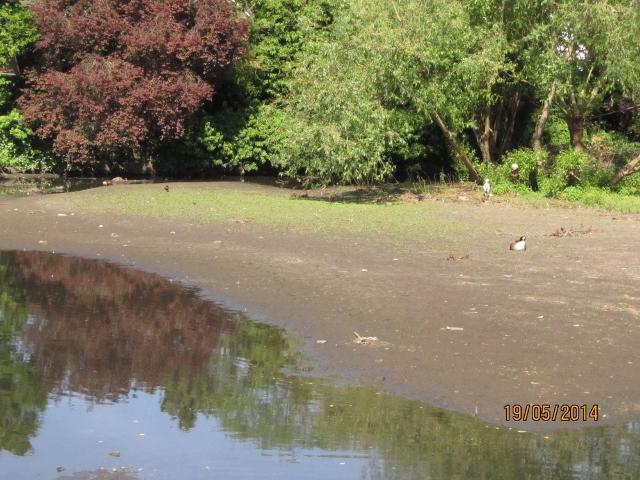 Update - 28 May 2014
We were interested to note that some activity had happened at Glassmill Pond as the picture shows. It looks quite idyllic but in fact it is a bit of a stinking mud flat! Below are the comments we have had from the project coordinator who is overseeing the restoration of Glassmill Pond

I can put you on the circulation list and keep you updated that way. In Summary we were asked by Bromley to look at Glassmill Pond and come up with a solution to the siltation problem and general management of the surrounding area. Over the last year we have done a number of consultation events to see what people would like to see happen and I am preparing a presentation for a public meeting to be held soon. We have already drawn up a draft proposal that I will tweak in time for the Presentation to make it clear what is proposed.

We have also been doing some volunteering sessions at the pond, that have included clearing rubbish, coppicing the willow on the islands and tidying up some of the surrounding area. I’m in the process of talking to engineers about designs and silt removal and will keep everyone updated as and when I have further information.

Glassmill Pond
We have recently learned of plans to improve the Glassmill Pond, and a sketch is shown below. Apologies for the quality - more to follow when we have it. 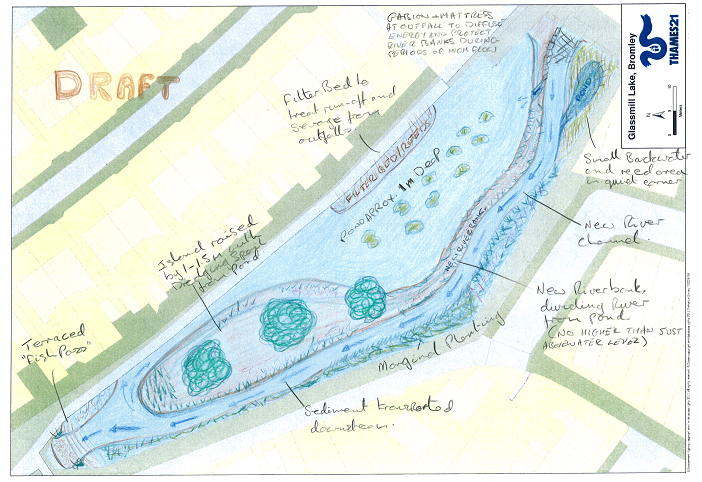