Bromley remains responsible for tidying the stones at the bottom of Elstree Hill, and we are hopeful that in both locations some sort of physical barrier may be installed to inhibit the migration of stones in the future.

The following diagram shows exactly where the boundary is and the agreement between Lewisham and Bromley on how it is to be managed in practice: 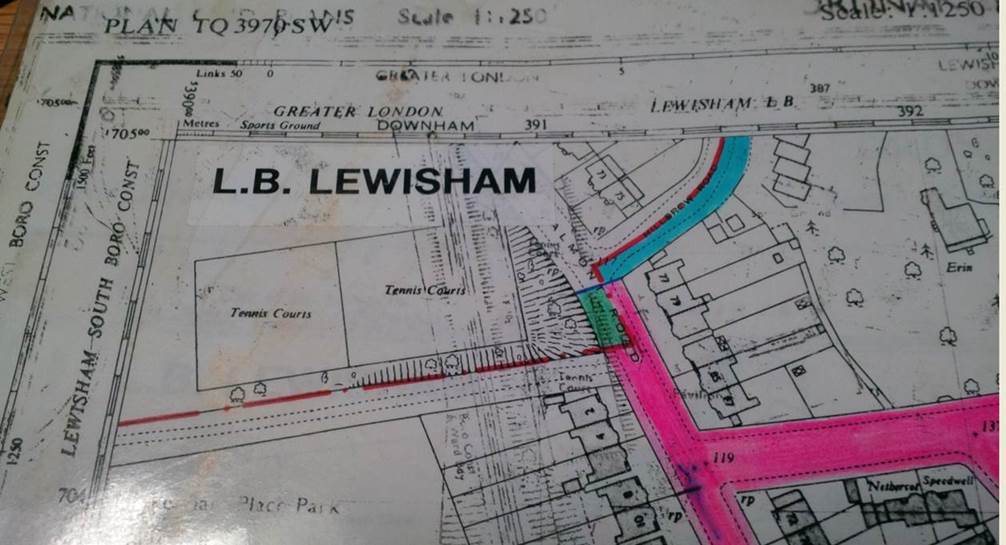 The pink shading is the area made Bromley’s by the 1994 boundary move, as set out in the Local Government Boundary Commission for England's Report No. 641 concerning Bromley's boundary with Lewisham.

The green shading is the area that is in Lewisham but which Bromley maintains under the Boundary Agreement.

The blue biro line denotes the working boundary under this agreement.

Update – 23 August 2016
Temporary prohibition of vehicular traffic in Bromley Avenue is no longer an issue. Southern Gas Works have completed the gas main replacement and Bromley Avenue is fully open to through traffic.

Temporary prohibition of vehicular traffic in Bromley Avenue – 5 August 2016
The Council of the London Borough of Bromley has given notice that in order for Southern Gas Works to complete a gas main replacement they intend to make an order the effect of which will be to impose the following restrictions on vehicular traffic. Bromley Avenue will be closed to through traffic for up to four weeks at the junction with Farnaby Road.

Displaced traffic will be diverted via:

However, this is almost a mile's detour, so local residents will inevitably find more convenient routes.

The order was due to come into effect on Wednesday 3 August 2016 with no specified finish date, but signs near the site now say it will be in effect from 9 August 2016 for three weeks.

Update 14 February 2014
Residents in Calmont Road will be very pleased to know that at long last we have arranged for the surcharging manhole outside 55 Calmont Road to be fixed. For ages, Lewisham and Thames Water were each claiming that it was the other's responsibility, but finally Thames Water have investigated and found that the pipes under the road were blocked. These have now been cleared and residents will no longer have to tolerate whatever it was that was coming out of the manhole.

Update 9 February 2014
We are pleased to announce that, following our request, the yellow line at the top of Bromley Avenue has been extended, which should make turning into Bromley Avenue much safer. The red lines indicate the extent of the new yellow line.

Update 24 November 2013
There have been no objections to the pro­posed double yellow lines on the bend in Oaklands Road, and painting is expected to take place shortly (weather depending).

Oaklands Road
At a recent meeting, residents noted that the inside corner in Oaklands Road was dangerous and would benefit from a double yellow line. We are grateful to Cllr Nicky Dykes, who instigated a review by Bromley of this issue. We understand that a consultation with residents should occur soon with a view to painting a double yellow line.

For further issues affecting local roads, hover over the above   Roads  tab to bring up the submenu of topics.