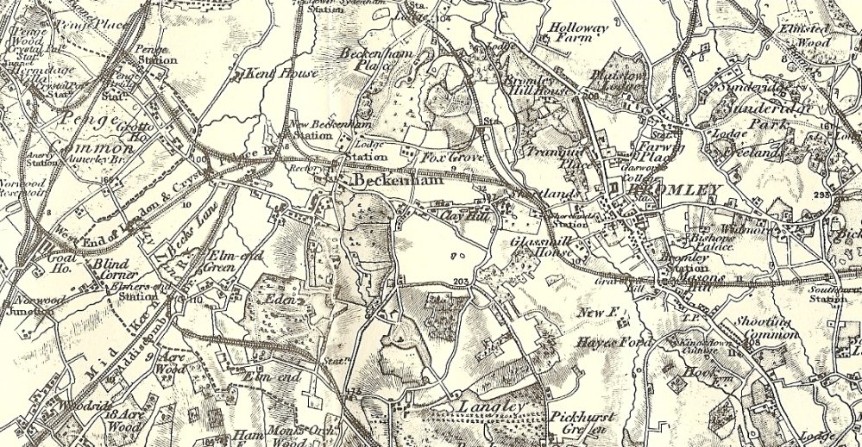 Above: an old map of the area before development started in earnest.

This Society does not, as its name may suggest, attempt to preserve the whole of the course of the River Ravensbourne from its source in Keston to its confluence with the Thames at Deptford. Whilst we are not indifferent to threats or enhancements proposed to the other reaches of the river, our principal interest is centred on the area where we live and so is usually restricted to that part of the valley from Shortlands Village to the “Garden Gate” including Beckenham Place Park.

WHY DOES OUR AREA LOOK THE WAY IT DOES?
The areas of higher ground, separated by the river and its flood plain, have given this area its particular character. In turn, the character of these two valley sides have been determined by their respective histories. Originally they were covered by ancient woodland.

Cator to the West
The major human influence on the west bank of the river must have been John Cator’s purchase, in the 18th century, of what is now Beckenham Place Park. He built the mansion and laid out the park. Having established the estate the family lived elsewhere for most of the 19th century and leased it to others. They sold off some peripheral land for development and had ambitious plans to build on the park itself but mercifully, these were never carried out.

In 1927 the LCC bought the park and mansion from the Cator family to preserve it for public use at a time when the Bellingham and Downham estates were being built. The park already accommodated a golf course at that time. In 1965 the GLC took over from the LCC and in 1971 the ownership of the park and mansion was transferred to Lewisham although part of the area was within Bromley Borough until the boundary changes of 1994 since which time the whole of the park has been within Lewisham.

Lord Farnborough and Samuel Cawston on the East
Meanwhile, on the other side of the valley, Bromley Hill House had been built on the top of the wooded ridge - it now forms the core of the Bromley Court Hotel. Its grounds extended northwards to the “Garden Gate” and to in the south. Its east and west boundaries were Road and the river respectively. There were three entrances to the estate, each with a lodge - one at the “Garden Gate” (which gave its name to the pub - recently transformed into a McDonalds), one off London Road (opposite the present junction with London Lane) and the third at the junction of Highland Road and Beckenham Lane - this was the last of the lodges to be demolished. Most of the land on the slopes and up to were left as a woodland garden, with viewpoints, picturesque shelters and long winding paths. The gardens gained sufficient fame to be visited by George IV and later by William IV and Queen Adelaide, as well as many of the Great and Good of the period.

The owners, from 1801 to 1838, were Lord and Lady Farnborough; he was a friend of William Pitt and a man of renowned artistic taste. Lady Amelia was an accomplished watercolour artist and was also largely responsible for the gardens where she made use of the many natural springs to create water features. She has left a valuable collection of her paintings which records her famous gardens. These also became known to the townsfolk after being opened to the public for one day a week during the summer months.

The coherence of the estate was lost after Samuel Cawston purchased it from Lord Farnborough’s nephew in about 1880. He lived in Bromley Hill House and created the pattern of roads branching off and sold off building plots for large Victorian villas. The coming of the railways meant that there was a ready market for such houses in the area with their owners being able to commute to the City easily for the first time.

Samuel Cawston also built Christ Church in 1887 as a “Chapel of Ease” for himself, his estate workers and local residents. He appointed the first minister but there seems to have been no doubt that Mr. Cawston made all decisions affecting the use of the church.

After two years his influence was very slightly reduced when it was licensed by the Church of England as a “Proprietary Chapel”. Soon after building the church the same Samuel Cawston built a “Children's Church” in . The building ceased to be used as a Sunday School in the early 1920's and at some stage was converted to flats. In the more recent past it has served as a Reformed Synagogue and is at present being extended.

Old maps show that Elstree Hill originally gave access to the stables and other outbuildings serving Bromley Hill House - some of which remain and have now become an attractive house on the north side of the road. Further down the slope were the large walled kitchen gardens to the house. To be seen still are two sections of the garden walls protruding between houses in .

Although the estate was broken up by Cawston’s developments, the steepness of much of the west-facing slope has inhibited building and meant that a significant amount of woodland remains.

The Valley Bottom
The land in the valley bottom has largely escaped development being the river’s natural flood plain. Right up to the 1930’s, parts were still wetlands - and included water meadows, reed beds, watercress beds and small lakes. These were to finally disappear under rubble dumped from war-damaged London in the late 1940’s. The flat, grassed area between the railway and river, known as “The Common” is the result.

One of the Society’s main aims is to resist changes which could further obscure the general character of this part of the valley. It would not be realistic nor desirable to resist all change and, unless near neighbours bring problems regarding small extensions to individual houses to our attention and ask for advice, we do not usually pursue such applications. Larger developments, or alien activities which can change the character of a street, are another matter. 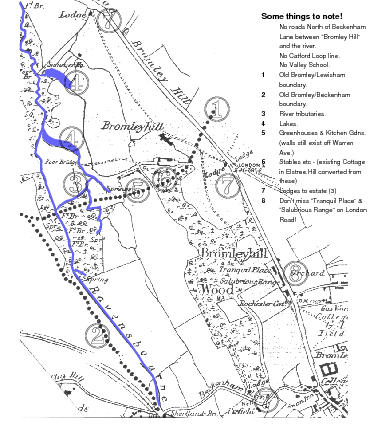 The 1865 Map
It is essentially how the Bromley Hill Estate looked when owned by Lord Farnborough between 1801 and 1838 - remaining the same until 1880 when it was sold to Samuel Cawston. Higher quality maps can be found here. 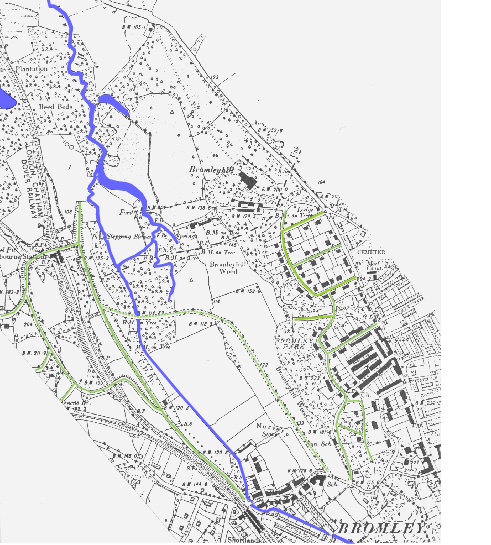 The 1894 MapThere is still no Calmont, Ashgrove or Coniston Roads or Warren and Madeira Avenues and what is now Farnaby Road was an unnamed, unfenced and presumably unmade track across the meadows.
Samuel Cawston had developed Oaklands Spencer and Highland Roads as well as Park End and Blythe Road on what had been woodland. Shortlands Village and Valley School have arrived.

This map now shows the Catford Loop Line, Downs Hill (with no houses) and Ravensbourne Avenue (then Ravensbourne Road) upon which there was just one house. Bromley Avenue was just a spur running to a gamekeeper's cottage (now No. 12).